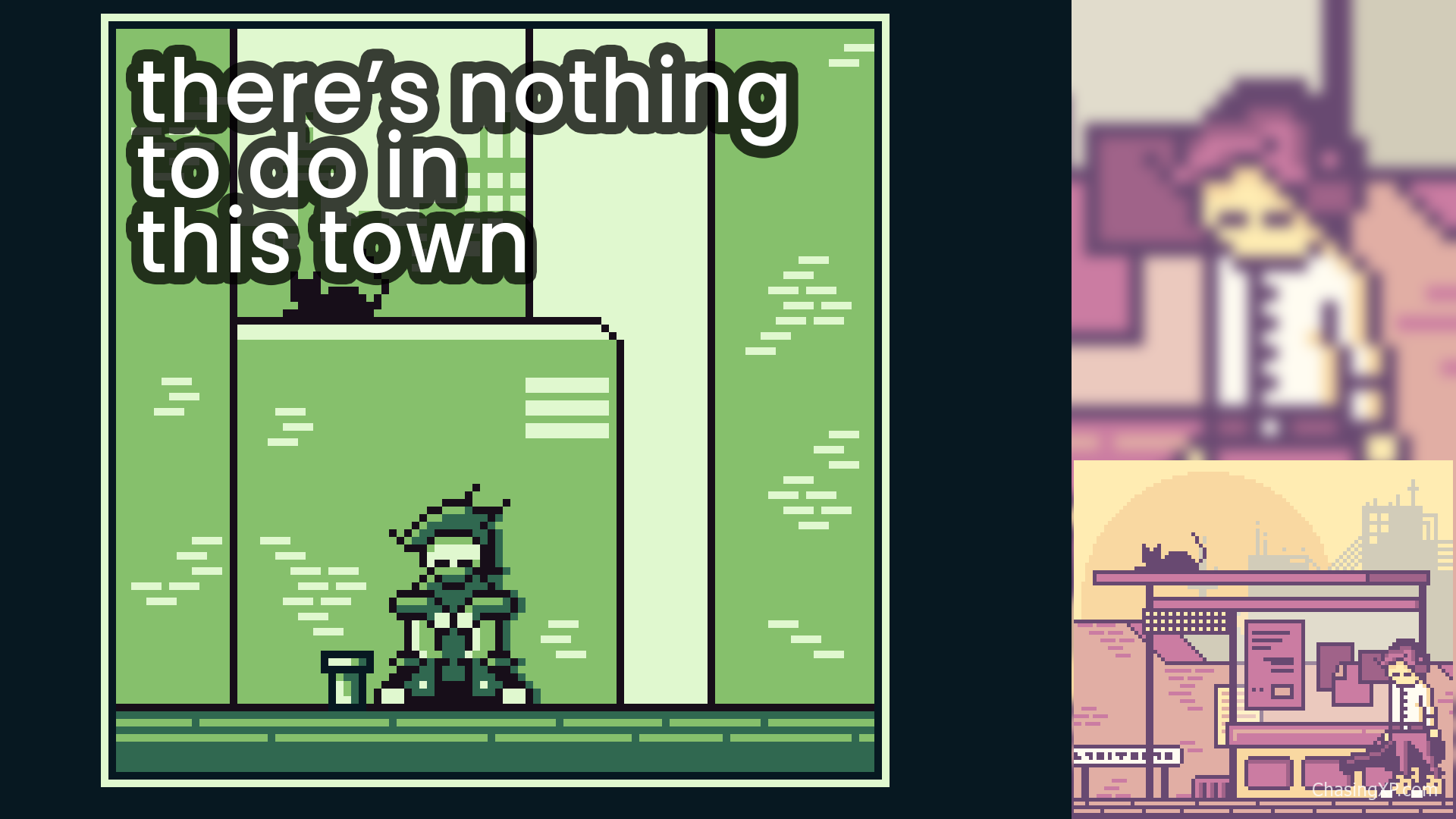 Interview: “There’s Nothing To Do In This Town” Developer Simeon Smith

Right now, somewhere in a bedroom or attic, a Nintendo Game Boy is being found and dusted off. The small screen flittering to life, and the familiarity of the buttons and weight in your hands flooding you with nostalgia. The muscle memory kicking in, and the first game loading up and filling you with a child-like glee. Ah… nostalgia.

From Tetris to Metroid, we all had our favorite Game Boy title, and it is truly heart-warming to see developers not forgetting the handheld – and actually developing games themselves for it. You can play “There’s nothing to do in this town” all the way through in under an hour, either online, or by playing it as an actual ROM on your Game Boy. We had to get an interview with Simeon Smith to find out why he took on the project, how he did it and what the game actually is!

The RPG, “There’s nothing to do in this town”, is a cool little Nintendo Game Boy ROM or browser based game that players can get through in under an hour. What inspired you to make it?

I’ve been making music with Game Boys for over a decade now with my project “donotrunwithpixels” and am always looking at new ways to present my music both live and online. When I saw the GBstudio tool I thought a short RPG would be a cool way to present some of my music, but at the time I played around with it a little but lacked the commitment to the project. Over the Coronavirus lockdown, though, my mental health took a massive dive and I knew I needed a new and all-consuming project to throw myself into to distract myself from all the sh*t going on in the world. This project was perfect for that and aside from my work and family responsibilities I lived and breathed the game for a few weeks.

Are RPGs you favorite genre?

How did you get into game development originally?

Originally, originally? My Dad had an old boxy Mac II, back in the mid nineties, and my friend Danny and I would make short point-and-click adventures for each other in HyperCard and swap them on floppies. Since then and until a few months ago, my programming had been limited to musical applications using PureData.

Did Game Boys feature heavily in your gaming arsenal?

Oh yes! It was really the only console I had as a kid. My family moved around a lot and we rarely had much money, but there was always the old Game Boy. Link’s Awakening was what got me hooked, and I then played through Mystic Quest a few dozen times (which I think was called Final Fantasy Adventure in the rest of the world).

What development tools did you use?

When I first saw GBstudio it was like someone had created the software just for me! It’s pretty limited in some regards, but those limitations just encouraged my creativity. MilkyTracker [is] where I made the music, I’ve been using trackers like LSDJ (Little Sound DJ) for the Game Boy and DefleMask for PC for years, so it was kind of second nature.

You created the chiptune in the game yourself. How did you do this?

GBstudio uses a driver called GBTPlayer to get music to work on the Game Boy. Once again, it’s very limited, even for the sounds the Game Boy can produce, but there are templates with all the instruments loaded for you to edit in a tracker into music for the game.

Originally I had wanted to put more music in the game, but the music I was writing was too complex and hanging up on notes when you changed screens. My music usually has a heavy rhythmic element and it just sounded horribly out of time while playing the game. In the end I had to simplify the main theme a lot, so I then pulled out all the stops for the music during the credits, where you can run more complex things. I’m really happy with how it turned out though, and I think all the trouble I had getting the music to fit right with the game paid off.

What are you most proud of with “There’s nothing to do in this town”?

I think the thing I’m most proud of is the town and character design and how cohesive it’s turned out.

The top-down elements and side-on pixel art feel like the same world, and the music feels right for the game. A lot of games have characters that don’t feel like they come from the same game or the music doesn’t quite fit and however proficient the programming is the design of the in-game world just doesn’t seem quite right.

I was really inspired by Link’s Awakening with the little platformer segments that are totally different to the rest of the game but fit so well because of the sprite and background design.

Do you have any advice or tips you could pass on to anyone getting started in Game Boy ROM development?

“A lot of tutorials say things like “Keep it simple” and “don’t try to run before you can walk”. I say f*ck that sh*t.”

Simeon Smith – Developer: There’s Nothing To Do In This Town

Yes – Get yourself a flash cart and play the game on the original system throughout development. It’ll massively help your player experience and give you a different perspective on the game.

Also, a lot of tutorials say things like “Keep it simple” and “don’t try to run before you can walk”. I say f*ck that sh*t.

If you’ve got an idea and the passion to make the project happen it’ll be a better game if you throw every idea into it and obsess over every detail. That’s not saying it should be complicated, but don’t compromise your vision just to get things done in an easy way.

What are your future plans for game development?

Now I’m familiar with the tools I’d love to make a longer RPG, but I need to come up with a great storyline for it. I think of the most impactful moments in RPGs I’ve played like the Ghost train in Final Fantasy VI and they’re all based around an incredible storyline where you get really emotionally connected to the characters. That’s what I need to find for my next game.

I’m also always making music and now I have the experience of getting my music into a game made in GBstudio would love to contribute my music to other people’s games. I’ve noticed a few games on the platform with little or no music and it’s a real disservice to otherwise great games.

So, yeah, if you’re developing a cool project and want some classic 8bit music, hit me up!

What games (indie or mainstream) are you looking forward to seeing released and playing this year?

I’m looking forward to playing The Survivalists with my 10 year old. Spiritfarer looks like my kind of jam too.

It’s the apocalypse, and you are running for your bunker; you can only grab ONE game (not your own!) to play as the world crumbles around you, for a long, long time… what’s the game?

I’ve been playing Street Fighter II Turbo for decades now and I’m still not bored with it. I think that’d have to be it.

There’s Nothing To Do In This Town