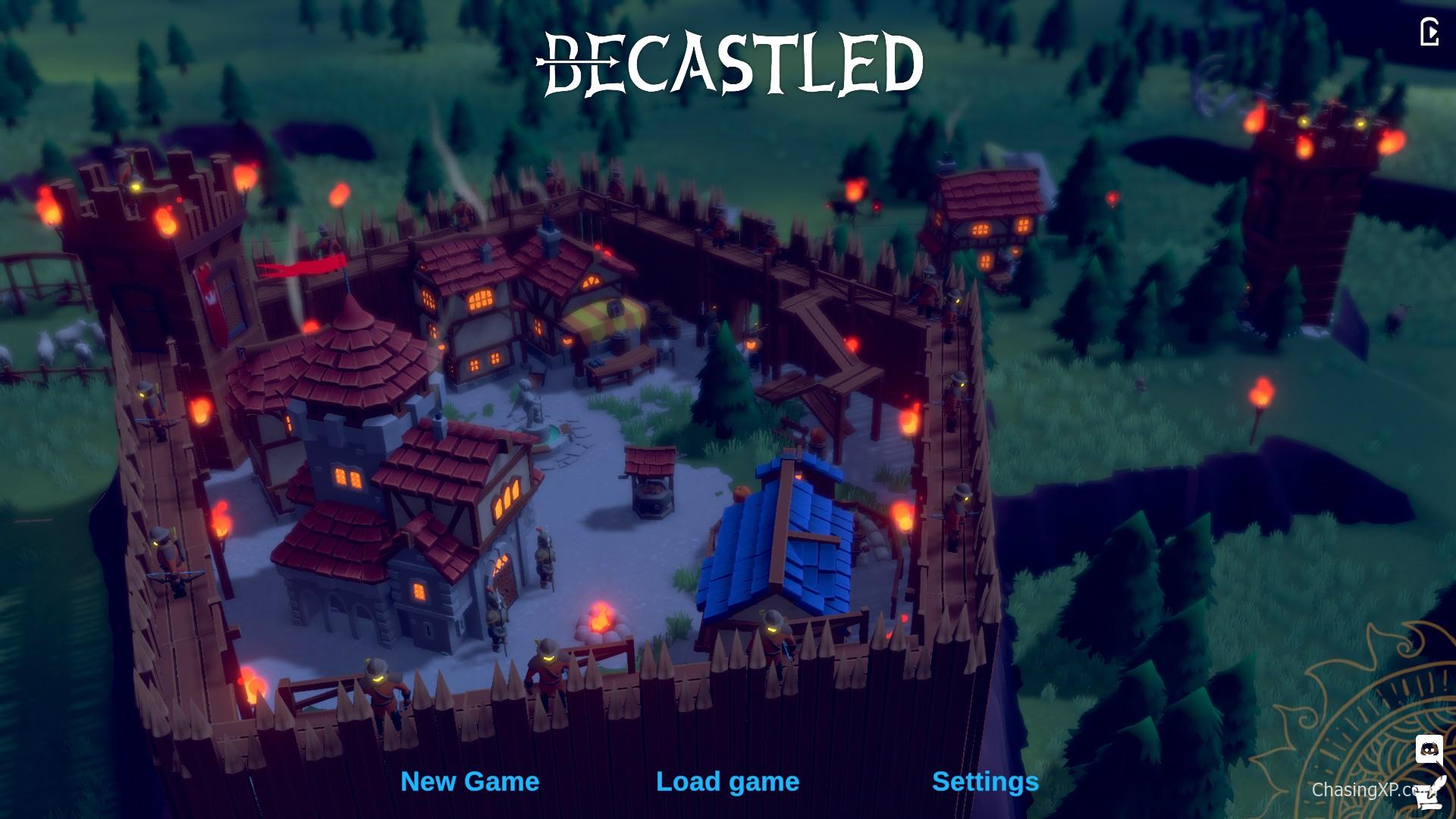 Checkshirted wearing, waxed moustachioed hipsters, this game is for you.

I mean it’s for the rest of us as well, but especially the bearded no logo uniformers who dream of wielding an axe in the wilds. Mana Potion Studios have produced a fine little RTS, city builder, tower defense game to delight us.

There’s a lot to love about Becastled, a wonderful game that is part city management, part RTS. It is like Total War for people who used to play Settlers on wet break in the science labs.

You’re A Lumberjack, Barry. You too, Harry.

You play the master of the Kingdom of the Sun. You guys rule the daylight and life is good.

The deer stroll nearby, the earth is luscious and your people are productive. You begin by placing your central hall or Castle Keep onto a chosen hex and found your settlement. Then you spawn some citizens willing to do your bidding and your first objective is to tell them to be lumberjacks, because almost all of the early currency is in wood. So, site yourself near some trees and get going.

Wood is the currency early game, building, expanding and sustaining that is the key, as it is in any resource management builder.

As the game progresses you need other things and very much like playing the board game version of Settlers, you need to be located next to lots of varied resources and some of them like stone and gold or a sort of mined solar gem are needed later for upgrading the stockade and towers to stone ones and building a church to restore your dead warriors in the resurrecting power of daylight hours because, you see, you are on a daily clock.

When the day is over, the Moon Warriors spawn somewhere nearby. They are blue goblins and trolls and they come each night without fail from different directions in ever increasing numbers and with better equipment each night. They march inexorably toward you like the hoards of Mordor, carrying scaling ladders, battering rams, cannon and siege towers to breach your city walls and so you must prepare for sunset each day to go once more into the frey to see if you live or die this day. To survive you must protect and defend your Keep. Citizens and troops may die, buildings may fall, but your founding Keep must survive or the game is lost.

The controls are delightfully simple, the expansion tree is entirely open, the only thing that holds you back is…lumberjacks. If you can get going fast enough and manage food and housing, then you can get other careers going for masons, miners and engineers.

The first few days are easy to defend against, by which time you need to be up and running with defensive structures and plenty of varied methods of defense. The only help you get is that a blue mist signals the spawning site for the Moon Warriors that coming evening. If you have not planned or do not have a productive enough village then you could find they are due to spawn on the most exposed side.

So, you need a strategy and you need to act quickly and consistently, managing choices and resources to sustain, defend and develop…much like any standard RTS. The difference and appeal with Becastled is the varied nature of how you can play.

It has stacks of playability with challenges split into eight difficulty levels, with three levels of combat difficulty, on seven different terrain types with resources either abundant or scarce and most interestingly you can alter the length of the game, effectively your win point.

Keep the Solar Kingdom safe for 10 days in the easiest instance or try for up to 30 days. With each added day of challenge the Moon Warriors get more powerful and more difficult to defend against, but potentially your castle starts to resemble Carcasonne…another fine board game Becastled clearly draws influence from.

And if you are feeling like Henry V then you can take the ultimate challenge of an infinity mode and see how long you can survive the nightly mounting hoards. I have seen some people on YouTube try to build a wall around the entire map and another who fought for 50+ days. That you can alter the challenge so greatly and try to break the game with challenges like walling the entire map is great freedom for a game.

There are some problems with Becastled; some men stop working sometimes and it often isn’t clear who has died when you begin the day after an attack and you have to check absolutely everything to reassign workers otherwise the city will start to fail and you need to work hard each day to grow and repair if you are to survive the night.

Pathfinding is another problem, the AI isn’t great at this, when you send troops to certain locations or to engage in combat with a group of the enemy they take the shortest direct path, but this can lead to them being stuck on a cliff edge or behind a gatehouse or something. With a battle raging this can be disastrous and you can be left wondering where that unit you sent to help got to, but it’s now all too late.

However, these minor problems for a game in Early Access and the devs are patching these sorts of things at least once a month so by the time you play they may even be gone.

On top of this they have published a clear road map of exciting development that includes tech trees, city building expansion and boss fights. I can only hope they make PvP possible in the future.

Becastled offers hours and hours of medieval fun at a bargain price. It proves both accessible and challenging at the same time. You really would be medieval to not go and get this, especially if RTS is your thing. Can you go 50 days without defeat? I can, but then I’m a Lumberjack, so I’m ok.