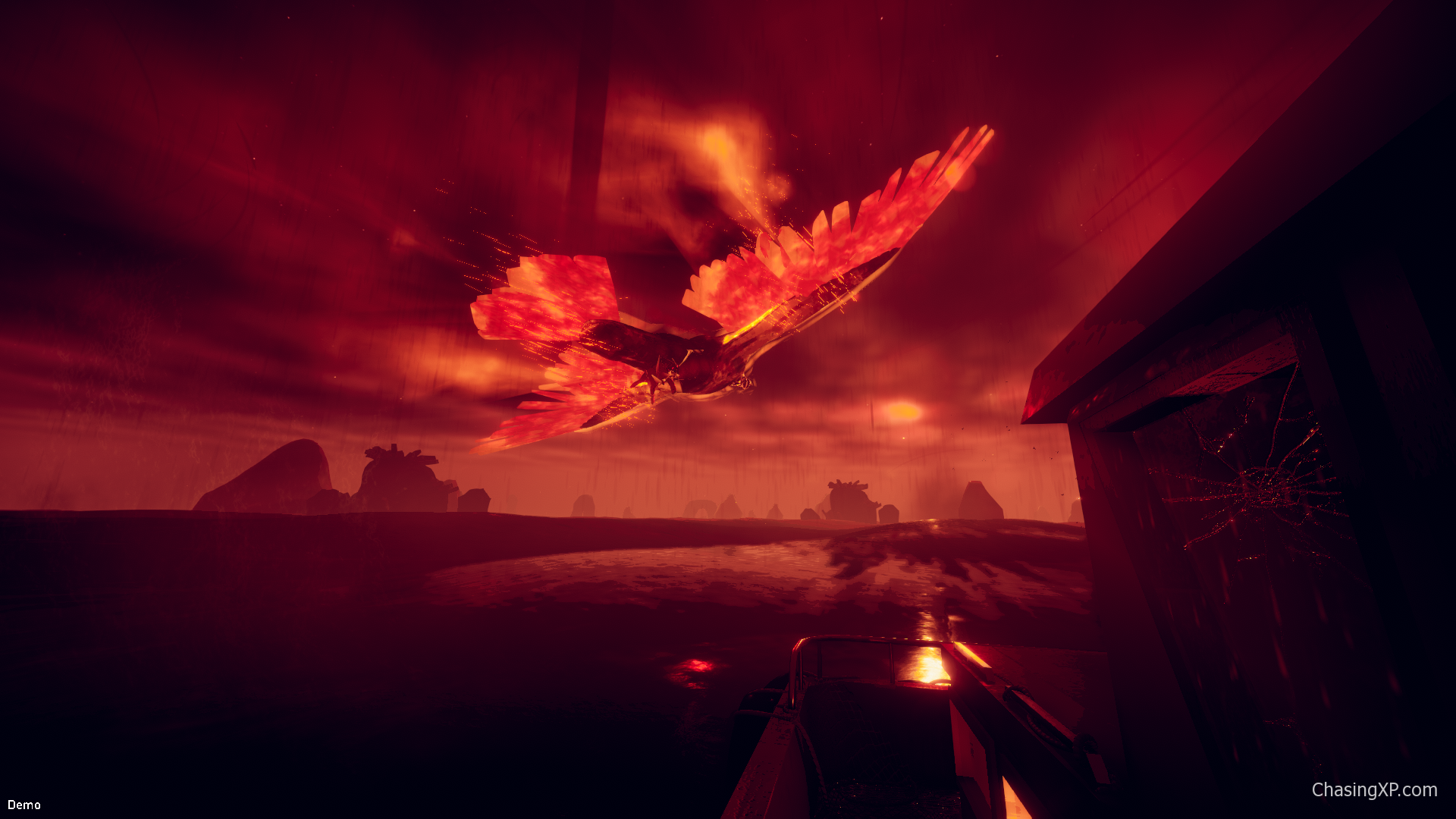 What Lives Below Review

This isn’t really a game… this is a secret recruitment program for the Japanese whaling Industry. If you complete this game your download IP location is given to the Public Security Intelligence Agency in Tokyo; then a strange man in black shades and black badly smelling rubber overalls sidles up to you in the milk aisle asking you how handy you are with a harpoon and if you want to join the fleet? I can’t quite verify this because the game is not as straight forward to finish as I imagined.

The game opens up with a beautiful menu screen of a vast colourful setting sun as you rise and fall on the swell of the sea, backed by a great electronic beat; It all bodes well. ‘What lives below’ is currently a demo and the developer has created what they describe as four boss fights, taken in a first person perspective.

You begin on the wharf of a tiny island with one mock Tudor house and a small boat reminiscent of Jaws; you just know that at some point you are going to whisper to yourself, ‘you’re gonna need a bigger boat’.

The procedurally generated ocean swells are big, vast and combined with the changing lighting and weather it does a good job of creating a dangerous, brooding and malevolent environment. It all makes you feel alone and vulnerable, this is reinforced when you meet the first sea monster and it leaps vertically 40 foot out of the sea.

The four fights on offer see you hunt an electric humpback whale, a giant brooding octopus who might even pick you up and throw you around if you don’t keep moving, an oversized (incongruous) eagle and a bloody great Godzilla sized sea turtle.

They will all try to destroy you by smashing or shoving you under the waves and it gets quite intense and chaotic in battle at times.

Initially in seeking the monsters they stick to a generated route (except for the octopus who is clearly a sedentary obese octopus) but the moment you do them the slightest damage the creatures pursue you and the frantic battle is on. To succeed you need to do a variety of things, stop the boat from bursting into flames, repeatedly harpoon the monsters to wear down their health and deal with additional dangers like avoiding lightning strikes.

You can’t do these things at the same time as you might in a standard fps. In this sense you have to manage your situation, rather like Command and Conquer or Company of Heroes, frequently taking care of the needs of survival (repair and steering) trying to give yourself time to fight in-between these moments, all whilst under attack; It is challenging.

The difficulty is set reasonably high. It’s fair, but there is a sense of ‘Live, Die, Repeat’ about this; when you die you start again back at the island, have to hop on the boat and go find the sea beasts again. And you will die a lot to begin with as you adjust and find your strategy; that is as it should be in a demo presenting boss fights; these are meant to be the difficult bits of a potential full game, but it might be frustrating at first.

Then there is the weapon, you only have a harpoon and there is something slightly repetitive about this, despite an alternate fire mode which simply electrifies it. Currently this harpoon feels a little flimsy, there isn’t much noise or punch to it and you don’t feel you are using a significant weapon here. Things are also a little difficult to control overall because the ocean swell is so great.

During your adventure, you move quite considerably on the boat in terms of field of vision and it makes it hard to get off accurate shots against the monsters, so it’s just as well they are huge. These things are all just minor gripes though and the developer, keen for feedback, is perfectly able to improve on them based on what we can see already on offer.

What lives below has garnered lots of positive attention, surpassing 2000 downloads in its’ first week on Itchio; a sizable achievement for a young developer. They have just gained a Steam development page and it is amazing to think that this is the work of one 19 year old in just eight months. It looks good, is something different in style, has some impressive ocean physics and shows a tremendous amount of potential.

Currently you’ll get a couple of hours play out of it and it will be interesting to follow the development of the wider levels, weapons and story building. So head on over to Steam, follow it there and download this boss demo on Itchio to give it a go. It is free to download, but you’ll regret not giving them a donation once you play it.

…and if you do well at it, you’ll find me wearing shades and a black suit, serving you at the sushi counter with a car outside waiting to take you to harpoon training.