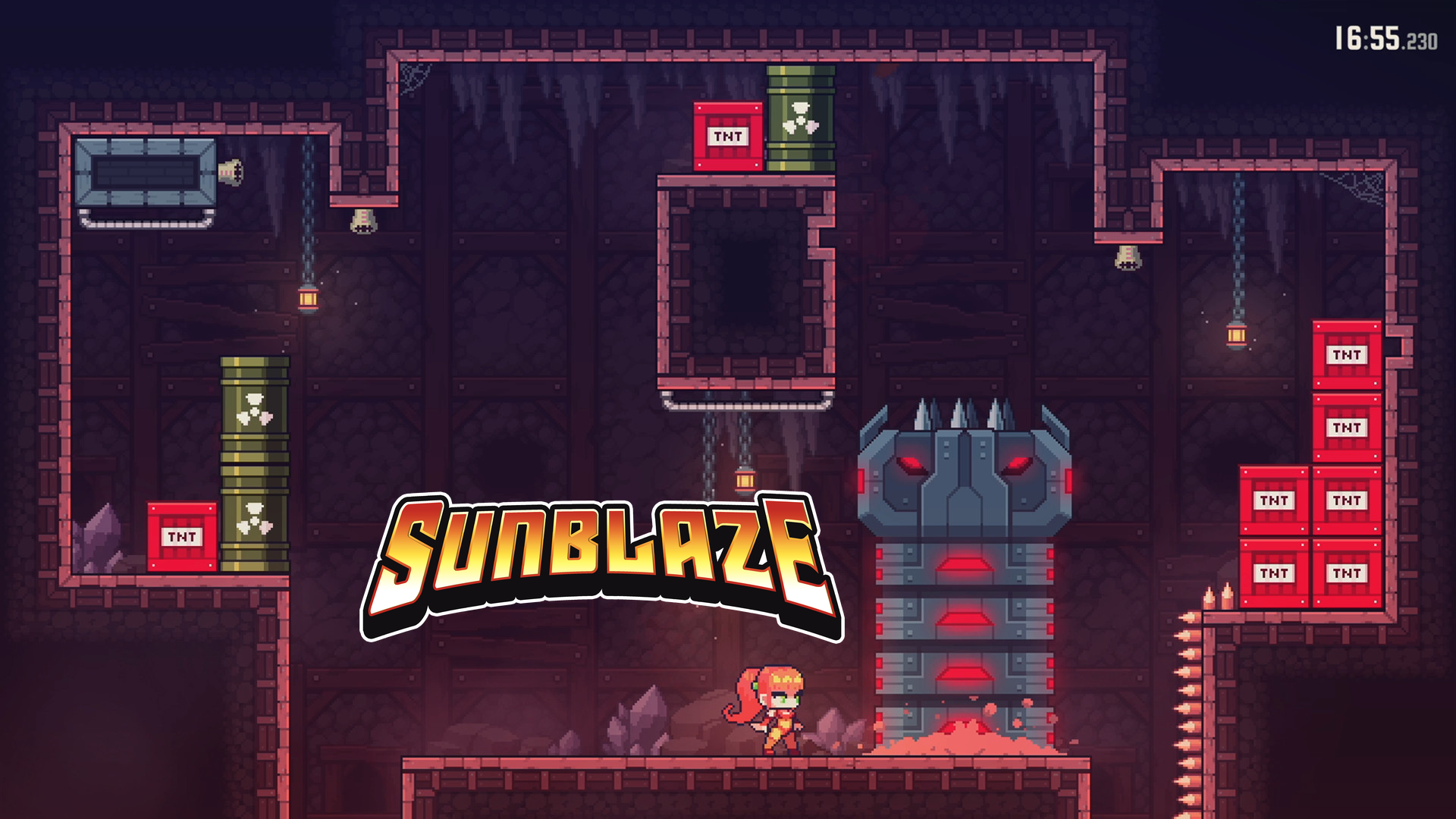 Shortly after, KISS took off their make-up and Ace Frehley then left the band. They had become a bit dated, silly even? So, too, the platformer. They came to be seen as undemanding, linear games; the preserve of younger kids who like the cartoon presentation of these games.

Even efforts to compete with the advent of 3D did little to halt the decline of the platformer from its market share heyday of a third of games sales to 2% by 2006, but whisper it like Ace Frehley… the platformer is back.

Sunblaze, developed by Games from Earth, is a 2D single screen platformer harking back to classic days. It’s title screen opens with a popping tune reminiscent of early Mario music and the soundtrack throughout is top notch.

You are Josie, a cute pony-tailed little girl whose father is a retired old superhero. Better than that though, Dad owns a Superhero training simulator – well of course we’re gonna try it. It is during the training session that we…err train and are taught all the basic moves in the game environment; the double jump, the dash, hang crawling, hitting things or jumping on things causes them to fall and this can break obstacles.

These are all the usual, expected staples of a precision platformer and they are introduced quickly and seamlessly. It’s a joyous start.

Then the training simulator goes wrong and you are stuck inside and have to fight your way through various colourful levels to escape back to Dad.

One of the starkest things about Sunblaze, right from the start, is how darn quick the game is in almost every respect. Sunblaze treats death in the best way, from red sauce to resurrection in a millisecond. Instantaneous and unforgiving failure is followed by instant play again without even the need to press a button.

There surely has to be a contest for who can rack up the most deaths in under a minute? Then when you complete a level there is no fade screen or load screen, the screen simply melts into the next level like the moment you see a magic eye image…boom it’s there and you are stood right where you were but in a different room, facing a different puzzle.

The pace is amazing, making the experience a pretty continuous one and emphasising the positive part of that, no matter how you are doing.

Pretty soon however, you start meeting those challenging levels where the game demands you put together your newly learnt moves into combinations in order to whizz around the board.

Each level (created by a friendly rainbow unicorn, naturally) needs to be solved and they become more a complex puzzle each time. There is an order of doing things, hitting jedi training robots, dropping blocks, exploding TNT, squashing laser gates, breaking glass barriers and all sorts of other things.

Pretty soon you start each level with a moment of pause to survey the puzzle in front of you and try to figure out a way to the end.  As the game progresses, each new chapter introduces more hazards. There are spiked floors, poisonous coral, explosive oil drums, volcano spitters, and evil computers.

Played normally, Sunblaze is a pretty difficult game. It isn’t called a Precision Platformer for nothing. You know what you are in for when you see that the game keeps a death counter and a timer. There’s going to be competition with speedruns and lowest deaths (or as I prefer, posting a screenshots of completing a game with an unbelievably high death count).

Death comes in many forms and frequently, you can explode into residue on touching spikes, be crushed entirely by a moving block or fried in classic cartoon style of shocking your skeleton when caught in a laser gate. If it all proves too tough there are a multitude of difficulty settings that operate seamlessly.

Firstly there is a Zen Mode which is, effectively a rookie mode and gives you the whole game and story with fewer levels and a reduced difficulty, so the game can be played by a variety of ages and capabilities.

On top of that you can switch on various cheat functions that remove the game cap or cooldown on abilities such as infinite jumps or infinite dash. You can even make levels easier by giving yourself the ability to ignore volcanos and laser gates by switching on invincibility or to smash glass barriers on contact and avoid the perils of messing with squashing blocks. These accessibility options can be combined in any mode; play the standard mode and tackle a particularly hard level by switching on infinite jumps for example?

A Variety Of Deaths

Sunblaze is a great game with a wealth of accessibility. It knows what the flaws of a platformer are and if gets around them confidently. You will never be stuck for too long, you can always tweak the game parameters a little for one level of the whole game and experience much the same as someone else who plays the more skilful variant. And for those of you who want greater challenges you can try to collect the power cubes in each chapter. Do all this and there are a reputed 700 levels in the game.

All in all you can play Sunblaze from start to finish in a couple of hours using all of the easiest settings and cheat modes or you can take on the full challenge and it will take you days and well over 1000 deaths. That the game can be immensely accessible and extremely challenging at the flick of a setting and lose you nothing in gameplay gives Sunblaze broad appeal.

The plethora of Roguelites around in recent years has given the platformer a lesson in how to present death as irrelevant to gameplay or at least not a setback to progress.

Is It Worth Buying Sunblaze?

During the lockdown of the last year there has been a widely reported jump in playing video games, Platformers are in the top five genres for growth in that period with platform play growing by 25% in that time.

These days Ace Frehley is back playing with KISS, they still tour and they are back in their daft glam costumes, but what we realised is that we liked it that way after all. Sunblaze is one of a developing new breed of platformers in the line of Super Meat Boy and Celeste that realise the platformer never really left us and know how to give us what we really liked all along.

You know that feeling you sometimes catch yourself doing in a game whereby you lean hard to the left in your chair, subconsciously willing your character to make that jump, you’ll be doing that a lot here. Like any game, when you put together a series of combinations to travel with speed and fluidity across and around all the obstacles to complete the level, it is glorious when you succeed.

I literally punched the air and let out a holler when I completed things. So, if you ever liked a platformer then you should check out Sunblaze and you too can sing ‘I’m Back’.