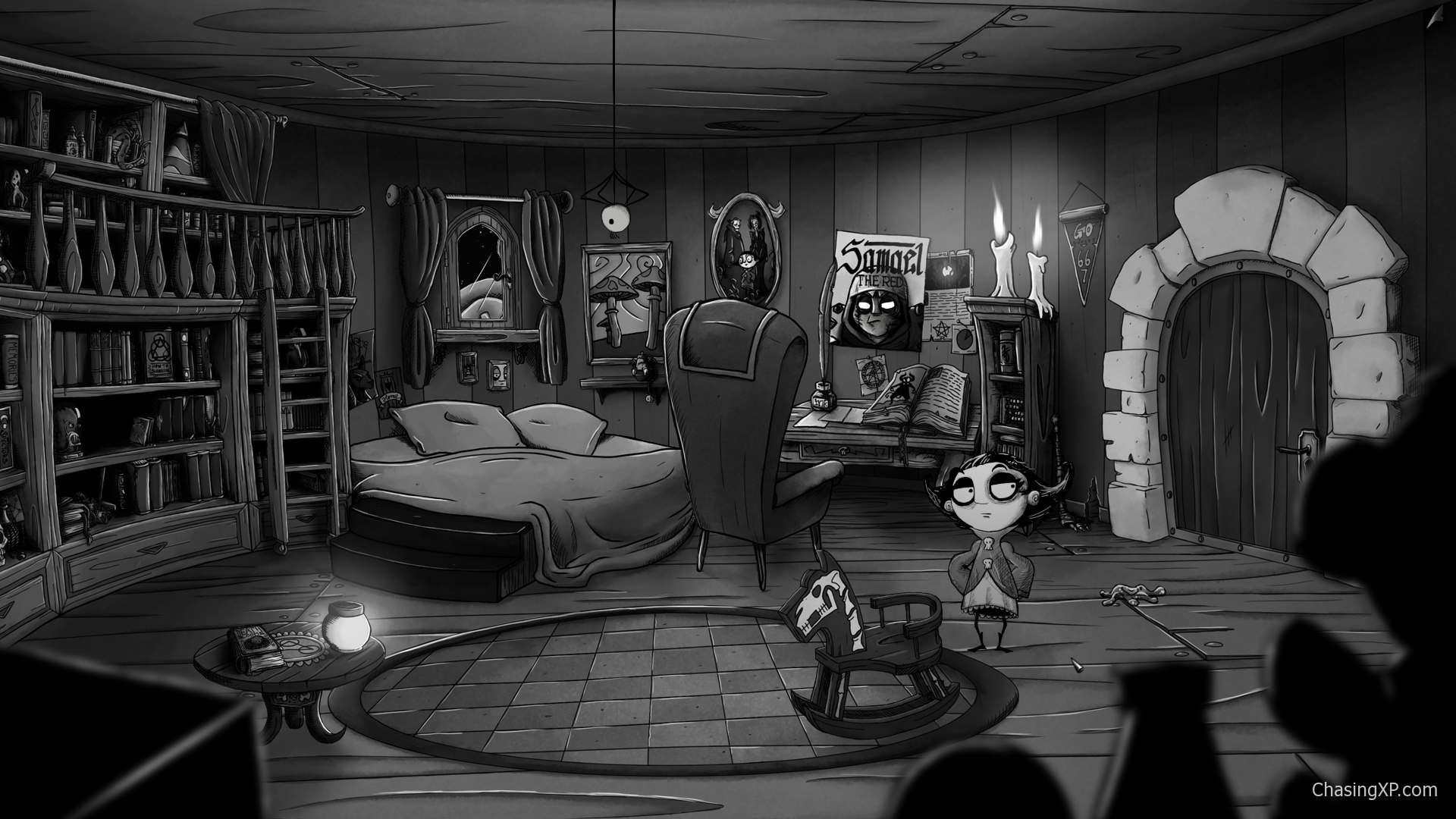 This Prim review was based on the demo available from Common Colors’ website, Steam and Itch.io. Check out the links below for more information.

I’m a reaper. No I’m not a man from the village come about the hedge. You might have an image of the Grim Reaper, some hellish agent of Death and destruction in your head and that I’m pretty handy with a scythe, but to Jonas Fisch the German designer behind this game, it means I’m supporting him to make his vision of a point-and-click adventure game become reality.

Reapers are what Jonas calls his supporters in his updates on the development of his Kickstarter. Jonas Fisch is developing a game called Prim about the daughter of death and you can download the demo at these links for free now on Steam and Itch.io

Prim is the name of the main protagonist, a young girl who needs your help to escape the Underworld. You play with her, directing her actions and investigations. In turn, she will give up clues about objects she observes and describes. It’s standard point-and-click adventure game stuff. It’s done really well though, top drawer stuff; think Monkey Island set in the Nightmare before Christmas. And about a minute after I thought this Jonas himself described it as just that in one of his Kickstarter videos I was watching.

Jonas has clearly achieved what he intended. What do these comparisons actually mean though? Well the end result is something spooky, cute and comedic, backed by an ace story. Prim ticks all these boxes.

The story opens with an explanation that Prim is death’s daughter; well he’s called Thanatos, which is the name of the Ancient Greek Angel of Death, but he looks pretty much like the Grim Reaper styled skelly bones figure of death we are all familiar with. Prim dreams of a young boy in the real world, the land of the living and has an overwhelming urge to go and see him.

Thanatos, her father, naturally (should that be unnaturally?) won’t let her, warning of serious dangers if she does. This disagreement must be entrenched, because the game opens, after a little narrative explanation, with Prim locked in her bedroom by deathly daddy and she wants to get out. You are going to help her. It is this portion of the game you play in the free demo and I urge you to play it. Everything about it screams good.

The mechanics are fluid, there is none of the common frustrations with point-and-click adventures here. You have no trouble directing Prim to climb ladders, stand on chairs, combine tools, look at small things in the far corner of a wall; the hit detection is clearly very well made. There are also some nice developments that show Jonas knows what bothers people. He has made the game a single button interface…with everything. You want to combine items – Left mouse, want to use an item – left mouse, want to open things – left mouse; the only thing that isn’t is opening the inventory, for that you just flick the scroll when and then everything in it is….yep – left mouse. It is so simple and intuitive that you almost don’t notice it and it makes the whole experience so clean and fluid, an absolute necessity for a successful point-and-click adventure.

On top of that you have beautiful black and white hand painted images for the scenes that add to the setting of this cutesy house in hell. It’s very Adams family in vibe and Prim is a little like Wednesday…only less violently serious. Prim is a very likable character and is superbly voiced by Maria Pendolino. In fact everything about this game is slick, clean and works perfectly. There are no glitches in this demo, nothing is missing. There’s even a whopping spooky score laid over it all. On top of this clarity of form it is laced with nice touches and a tonne of humor, at one point a disco ball drops from the ceiling and death takes a cheesy dance, it’s delightful and unexpected.

Jonas Fisch clearly knows his stuff, he has made smaller adventure games in the past and obviously honed his craft. His pitch videos on Kickstarter are full of vim and charisma demonstrating a turn of phrase and explanation. This should not come as a surprise given his day job is as a secondary school English teacher in Germany. You can see his bright, playful intellect in the use of the word ‘reapers’ for his fans. It is playful and wields a duel meaning. Not only does it reflect the game subject, but it is also addressing those who have funded him and will in the near future, reap the rewards of backing him.

The Kickstarter reached its base goal in just 22 hours and is well on the way to breaking all of its stretch goals. This is a good thing, because it means we can expect an eight hour game of many more levels and puzzles to follow this demo. Great, because I really want to know what is through those doors at the top of the stairs. To see what I mean you will have to go and play the demo.

Is Prim Worth Playing?

I’d like to round this Prim game review off with a very strong word of advice. If you do one thing today, it should be to head on over and download this.

The demo gives you about 40 minutes of play and shows you exactly how the game is going to be. After that I predict you will immediately slap it on your wishlist and sign up for his newsletter to guarantee you Early Access two weeks ahead of anyone else.

How do I know you’ll do this? It’s because I’m not normally a fan of games like this and it was the first thing I did upon completing the demo. The game is scheduled for release in 2022; that is a highly ambitious timeline, but when you play the demo you can see all the mechanics are in place and Jonas seems so calm and organised that I believe him…maybe also his wry grin to you on his videos reveal he has done a deal with the devil to ensure he reaps the rewards that are surely heading the way of Prim.