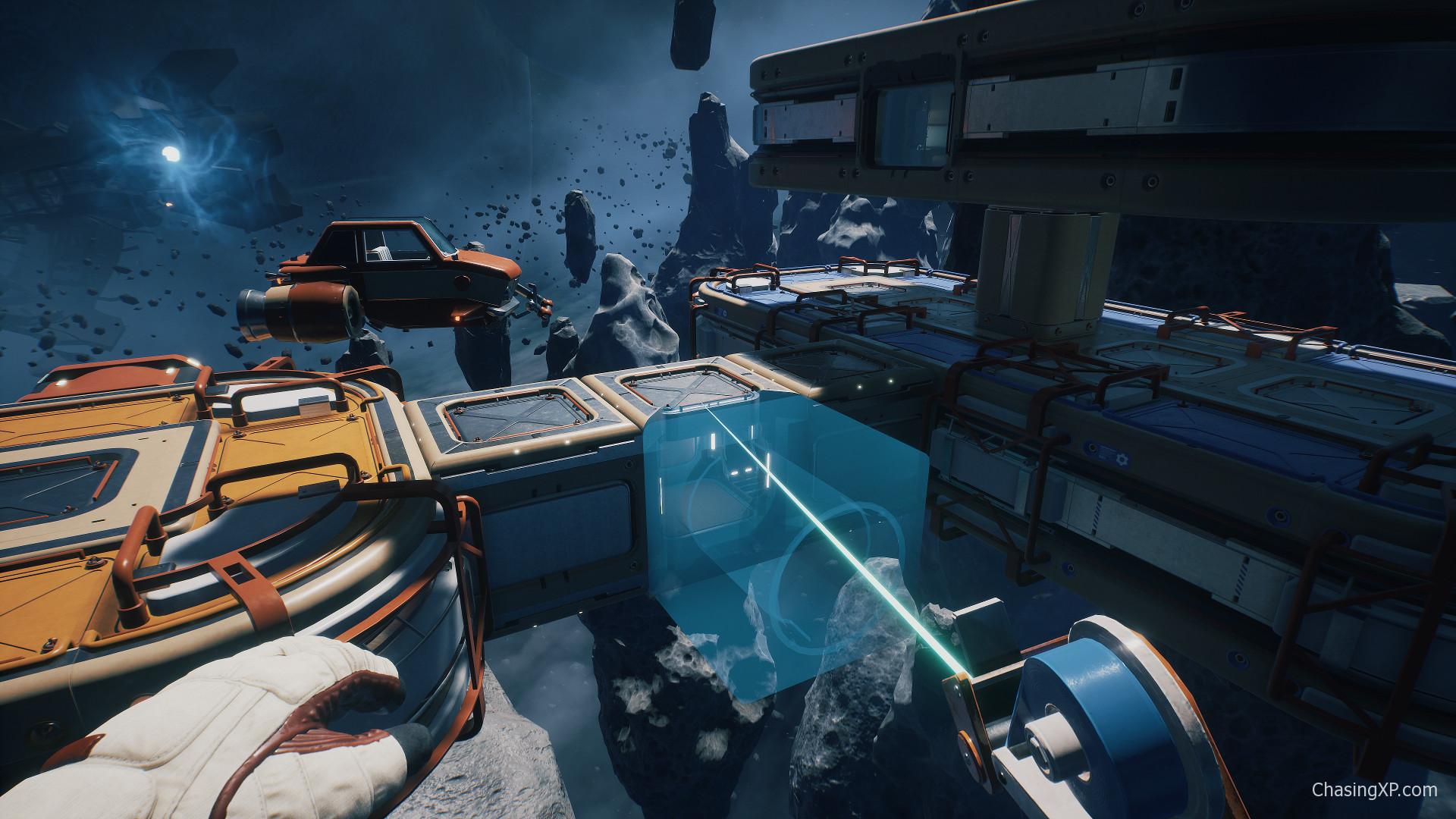 From the makers of the Matrix… no news yet, but I am in possession of an immortal chicken.

No it’s not a euphemism for something rude, these things do go together. They are a glimpse of the kind of knowing humour on offer in Breathedge. It catches you off guard as you watch the opening cinematic of you being dragged towards an interrogation by some robots made from coffins….you’ll find out later.

Somebody Cut My Cable

A few days after I was given this to review someone cut my internet cable and I had to go somewhere else to download, update (trying not to forget my external drive) and shift everything onto my laptop just to get the game open to run. I was starting to feel like I was in ‘The Game’ and that this was some sort of meta pre-level of scavenging to prove I was worthy of playing Breathedge.

Having crafted together the ability to play the game I did not dare switch it off in case I couldn’t get back and my guy was lost in space to die.

…and I still have no idea why I am in possession of an immortal chicken.

Breathedge is a space survival sandbox game where you are constantly seeking out materials from the wreckage of the space ship you crashed in, to survive and improve your situation. It inevitably involves crafting essential equipment and tools to allow you to progress and in this sense it is rather linear and fairly standard, especially in the early levels. You are given a set of tasks to complete largely in a pre-designed order and you are prevented (by distance and no knowledge of location) from accessing other areas until crafting progression allows.

This is in ‘standard’ mode which is the story mode. Here there really isn’t much of the base building that you might expect in a sandbox crafter, rather you use discovered bases. Breathedge does offer a variety of play options which level story and freedom against permadeath, unlocked achievements and base building.

Breathedge is, graphically, a downright beautiful game right from the get go. The premise is that you have survived an explosion of the largest spaceship in human history, which it transpires was a funerary ship (appropriate). You are on it delivering your fathers’ coffin when the explosion occurs and now you must survive.

Progress, like any sandbox crafter, is slow and contained at first, but opens up at a decent rate once you get past the first chapter. Your problems scale with progress as you move from simply surviving and getting home to uncovering and becoming embroiled in far bigger machinations as the game switches from a crafting exploration game to a more liner adventure game in its final few sections.

A common frustration of sandbox crafters is obtaining enough of the right resources. In Breathedge common sense developers have prevailed and resources divide into two categories.

Firstly the basics to survive, ice, various nutritional elements for crafting into food and various metal and chemicals for tools. These basics are in plentiful supply and often floating around freely…you won’t run out.

Secondly the other stuff, materials for crafting into bigger items (once you have discovered blueprints), plastic, copper wiring, rubber, paint, etc.

These things are found next to or attached to items of space debris. So there is some clarity about where to look for stuff you need and the in-game encyclopaedia offers visual clues on where to find them. This clarity means progression is always possible and never too far away.

There are some gripes about unnecessary time wasting that falsely lengthens game time for no purpose and it is all over the place. Journey time is one particular complaint, it takes a long time to travel anywhere initially and repeatedly having to return to your base to refill oxygen on top of that is annoying. Planning and crafting to bridge what, early in the game, seems a vast distance and discover a new base takes a long time.

Once you get there and realise you need to return to transfer your phat stack of collected resources, over several journeys it is most definitely annoying. I mean having unlocked or completed an area, what is the point in making me travel 4 minutes back to my original base just to collect some resources

This is space and the future, (albeit a 1950s Soviet stylised one) so why, once I have securely moved on in the game or discovered more bases, can I not activate a fast travel system?

This needless wasting of time is present all over the place; you see it in the actual crafting, where every object created needs a 5 second wait for it to be built. If you are making several components that’s a wait of a couple of minutes for no reason at all.

Health is another example, it is restored by sleep, but you literally have to wait staring at a screen doing nothing but watch a spinning sand timer for a minute in order to recover your health. It serves no purpose except to waste time, at least until you get the medical box blueprint to craft instant healing.

It is for this reason that some major reviewers have been unkind to Breathedge, but I think they’ve got it wrong. You see any complaint about this artificial and imposed pointless game lengthening (which I think is a valid complaint) is dispelled shortly after completing chapter one.

Very quickly after this point you discover a second base and rapidly open up triple the length of time on oxygen, bigger spare tanks to carry and even discover a vacuum cleaner rocket bike and begin whizzing around at quadruple the speed like a sort of space Hagrid.

So, all of these complaints rapidly recede and the only annoyance that remains is the short wait time for crafting items, but that, by virtue of being the only one, becomes trifling as the game opens up into a vast multitude of tasks to complete and places to investigate; it isn’t as if I have to do a stupid three minute puzzle every time I want to buy items cheaper, (yes I mean you Bioshock) and if it doesn’t spoil that game I can assure you by chapter two crafting items won’t be bothering you here. Aside from that, developers are responsive to the community and a recent update has increased the oxygen and tool durability in the early stages to improve your experience.

Breathedge is a wonderous game of beauty, discovery and adventure. The college humour jars at times, but like the annoyances of the early stages this too dissipates and a more confident game emerges.

In Breathedge there is always something to keep you going and I have lost hours into the early morning on repeated nights playing this because I felt I was just about to crack a puzzle or felt I would just investigate that thing over there, just finish off this last part of the task and I will have made significant advancement. Every achievement in Breathedge feels significant and getting that feel and commitment from a player is a sign of a good game.

You’ll get about 30 plus hours out of Breathedge and the developers are planning two free expansions later this year. It isn’t a perfect game or consistent and in some ways that’s a good thing. So, if you can see past the jarring frustrations of the first chapter (somewhat now patched), you will be rewarded with a visually stunning adventure based largely on a solid crafting background. It’s worth your time and you will enjoy it.

I still don’t know why they give you an immortal chicken, but it’s good for shorting out flayed electrics on space debris. I wonder if that’s how my internet cable was cut…