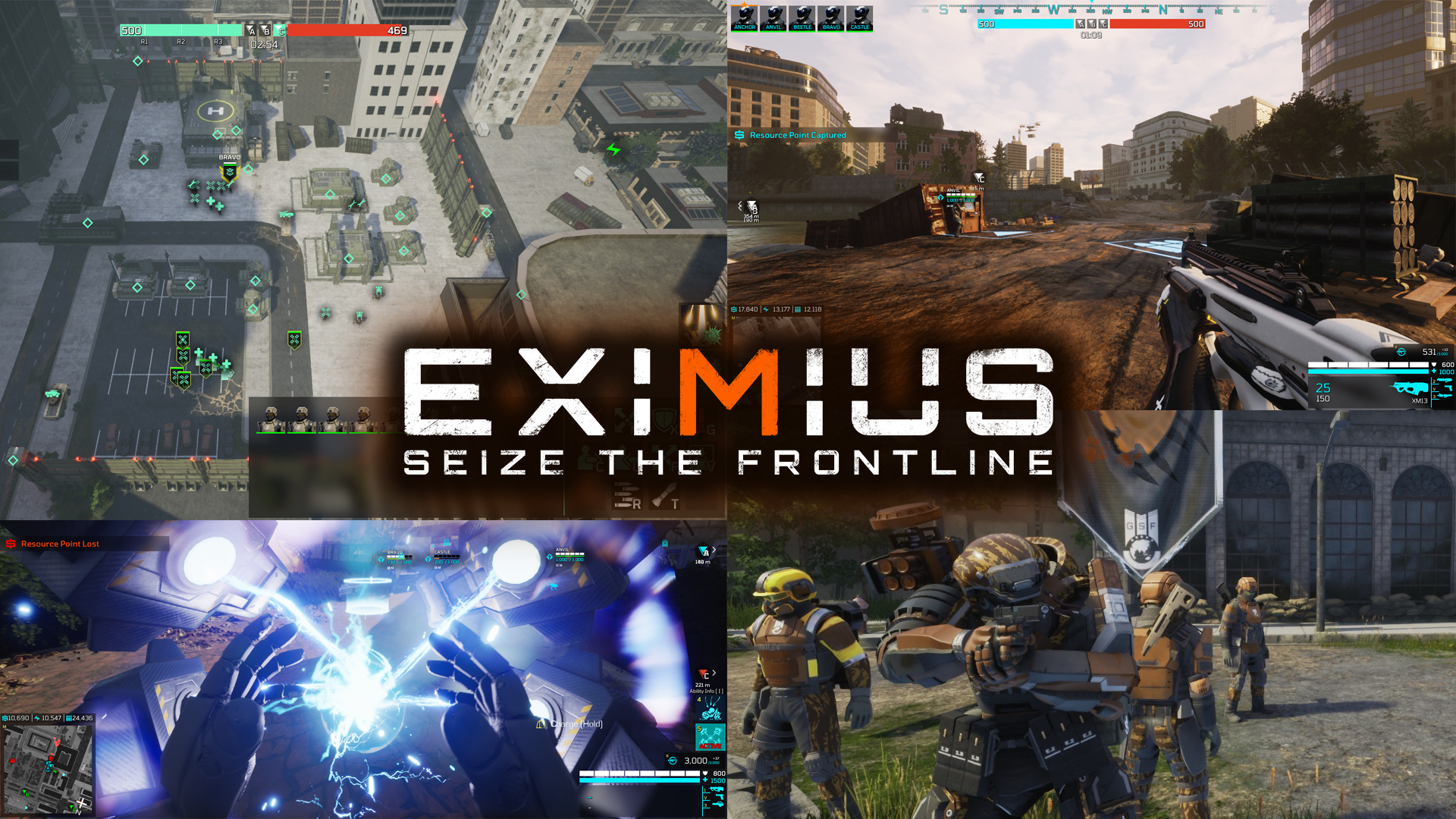 War, good God y’all… What is it good for? Absolutely nothing.

Turns out Edwin Starr was wrong. War, Uh-huh…yeah, what is it good for? Turns out it’s absolutely great for computer games.

Where would we be without the FPS? Still throwing pine cones across the sandpit and claiming I had been revived by Jeff and wasn’t dead. From Command and Conquer: Red Alert, through Call of Duty and Company of Heroes, I’ve loved them all along the way. Hold on there big dog, I know what you’re thinking…FPS.

Eximius: Seize the Frontline, from Ammobox Studios is just out of Early Access and is blast. It is an FPS / RTS Hybrid. Whaaat… Yes. You can play the game just like Company of Heroes and you can play it just like Call of Duty. You can even play it both ways at the same time if you want to. How is this even possible you ask?

Eximius is, in simplest terms, a 5v5, squad based arena battle set in the near future of a collapsed political order. Two factions vie for control of the future world order: Axeron Industries, the product of a global financial elite trying to reestablish order. They have units based on robotics to save people from front line combat. The other side is the Global Security Force (GSF) who are made up from the surviving political world order prior to collapse.

All this set up matters naught though and is swiftly forgotten once you are past the opening intro. Simply pick a side and go through training. There is no real consequence to the side you pick except the choice of weapons, units available and some inevitable variation in play style to suit your differing strengths. Mostly they are similar classes but with slightly different qualities.

The controls are pretty standard and so is the weapons training. There is nothing confusing here – machine guns, pistols, bazookas, EMP weapons, etc. Everything is comfortably familiar. There is a good sound to the fire system, the weapons have variable recoil, but upgrades can improve stability. They sound powerful and act heavy, pleasing stuff. On the battlefield the draw distance for shooting is pretty good, even with standard weapons.

When you leave training, you can choose to join an ‘Open game’ which is just a rolling restart game with whomever joins and the remaining spots made up with AI players. Or you can join a specific 5 man team to take on a set scenario or you can tackle a variety of maps and missions yourself, offline with a team of AI support. There is lots of variety and the AI is of such a good standard that you need never worry about matchmaking to get a game. There are always at least two of these happening at any given time.

All of this seems like a pretty standard Battle Arena game and you’d be right. What sets Eximius apart is that only four of your squad of five play as FPS officers on the battlefield. The fifth man plays the game RTS and from a standard zoomed RTS view of the battle.

It turns out that what really makes the difference to your team is the Commander. They provide tech upgrades, they can build tanks, different classes of soldiers, they assign a support group of soldiers to you or not and they can drop strategic supply points to enable you to refill ammo and change weapons as you meet different foes. They play Command and Conquer whilst you play Counter Strike and you can talk to each other, ask for things like re-supply, reinforcements or decide attack plans and changes. It is a quite excellent achievement to blend these two game styles seamlessly together and talk/plan across them at the same time.

There is a rare breed of revered heroes called ‘Battle Commanders’ by Eximius community who are players capable of playing the Commander role and capable of jumping into the FPS fight at crucial moments to rectify some part of their grand plan and never losing sight of the overall plan and time in the frontline.

I tried being the Commander once or twice…let’s just say I need practice. I have mostly been playing as an Officer on the battlefield and sometimes my human Commander would provide ammo and weapon upgrade stations for me to use and sometimes they wouldn’t. In one match it became clear that the Commander had his plan and I wasn’t in it, I could die and respawn frequently but there would be no upgrade points for me.

In another we had upgrades and I joined the fray attempting to follow other Officers in direction and battle as support. The Commander rarely attached soldiers to me for support, clearly deeming my contribution unreliable, this was until a crucial point late in the battle when we were losing heavily that I slipped away changed my weapons and crossed to the other side of the arena undetected. I destroyed a tank holding position, protecting a flag point.

The response from my Commander was instant. He held battle back where I had come from and sent me as many reserves as he could from reserves to support what he recognised as a decisive move. We went on to capture several nearby resource points and the enemy were crippled. We lost less than 20 battle points to the enemy teams 300 from this moment on. The post game chat was full of delight and congratulations. These are the moments you play Eximius for.

It isn’t a perfect game, the learning curve is initially steep, but there is a lot of potential in the game for varied styles of combat. More variety of weapons are being added and of course, more skins and customisation. The development team is dedicated, improvements are frequently made and what might be thought of as currently lacking does not detract from the glory of the game.

Eximius is a Latin word meaning ‘excellent’ and Seize the Frontline is indeed an excellent game. It is not just another battle arena with thrown together assets; it is a well thought out game that offers a deepening level of skill the more you play it. They have a welcoming community in the Discord and the game is structured so that newbies can join a team of veterans and not hamper the chance of victory severely. War, uh huh, yeah…may well be good for computer games, but me? Good God y’all I am far from Eximius at it. It is fun though…see you in the fight.

Stephen plays on Eximius: Seize the Frontline as Alt_Ending and is easy to defeat. Take a good look at my face because all you’re going to see from the floor just before you respawn is the back of me walking away.