This Hi Score is a World Record in gaming.

What does that have to do with Swirl Watch, because Swirl Watch sounds like a small tablet you get from some guy in a trance club based (this week) in a disused factory out of town. Recently I have been indulging in a lot of Swirl Watch; it’s a type of ‘roid. No, not steroids… Asteroids.

You know, the classic Atari arcade game from 1979 where you spin around a looping game screen and blow up asteroids and alien ships whilst trying not to be hit by the floating, exploding debris.

That is the World Record hi-score for Asteroids; well it turns out that Asteroids is alive and well and now called Swirl Watch. It’s developed by German indie designer Sleeper Games, who has several games on Itch.io and Steam. 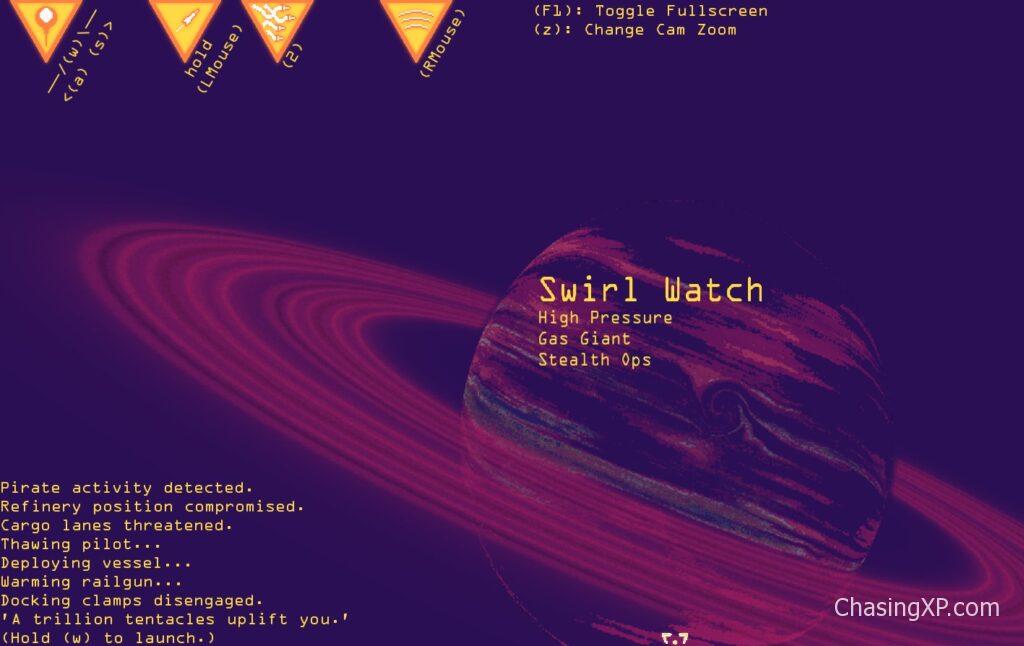 Asteroids had a brief revival in the late 90s on the PS1 and N64, but it was pretty much a glossy back drop remake that added levels to it. What we have here in Swirl Watch is a much more versatile and interesting iteration. Developed in 48 hours for this year’s Global Game Jam, the version available on Itch.io is the ‘redux’ version and the result of an additional week’s work and hitting Itch.io for download at the beginning of February. 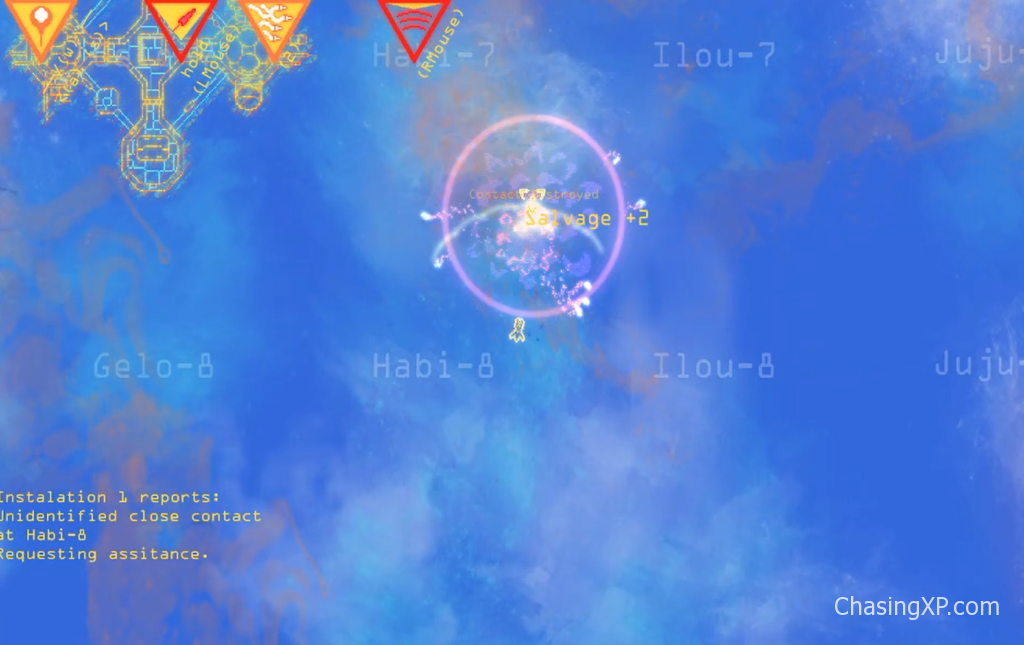 The game is described as ‘High Pressure ship-to-ship Stealth Ops’. If you are a fan of homeopathy and leeches then you can call it that, but the rest of us will describe it as Asteroids+ and it’s good.

The developer previously worked on mods for Faster than Light and there are other more worthy game influences on show here. The trader/pirate/space station basis for the game has clear echoes of Elite and you see this also in the style and sound of the ‘contact’ messages that pop up in game.

The emphasis and mechanics of the stealth in many ways bears a resemblance to a submarine hunter game, with the popping in and out of visibility. Clearly there is a lot more to this game and you can see how it might develop, but currently there are no plans to take Swirl Watch any further without significant interest. 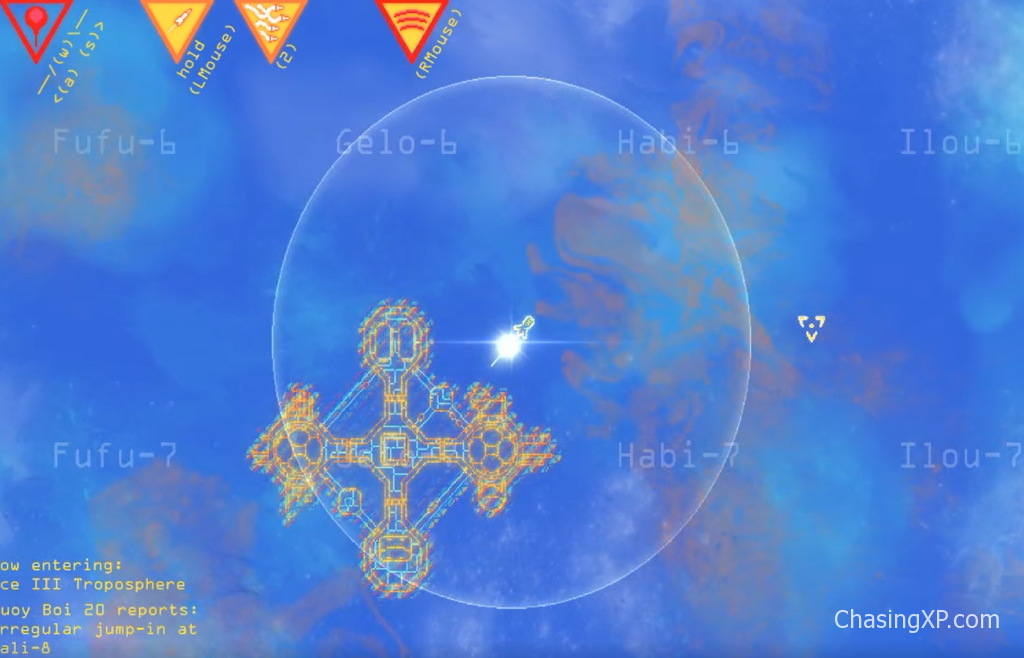 Swirl Watch then, is a top down shooter played in a 2D confined space. When you move off the screen you don’t appear incoming on the other side, there are boundaries here.

The premise is that you have to defend trade shipping in a section of the galaxy. You can fire your rocket engines to move you forward and rotate and you’re equipped with a rail gun and missiles to attack the enemy ships. First though, you have to find them and you do this by using the RADAR, which uncovers enemies.

Sometimes enemies are fairly static, sometimes they move. They are always hidden though and if you do not use the RADAR then you will discover their whereabouts, because they will fire on you.

There are a series of power-ups you can acquire through the game. Most come as a result of destroying enemy ships and picking up the cargo. Using the thrusters to move or firing the weapons reveals yourself to nearby enemies and they will communicate your location and heading to other enemy ships.

You can cut engines and go silent to escape missiles and detection and drop into a cloaked state. Weapon cooldown, hull integrity (health) and RADAR use all work on a regenerative, limiting way. If you succeed in destroying all enemies, then you can move to the ‘T-Gate’ which takes you to the next level. 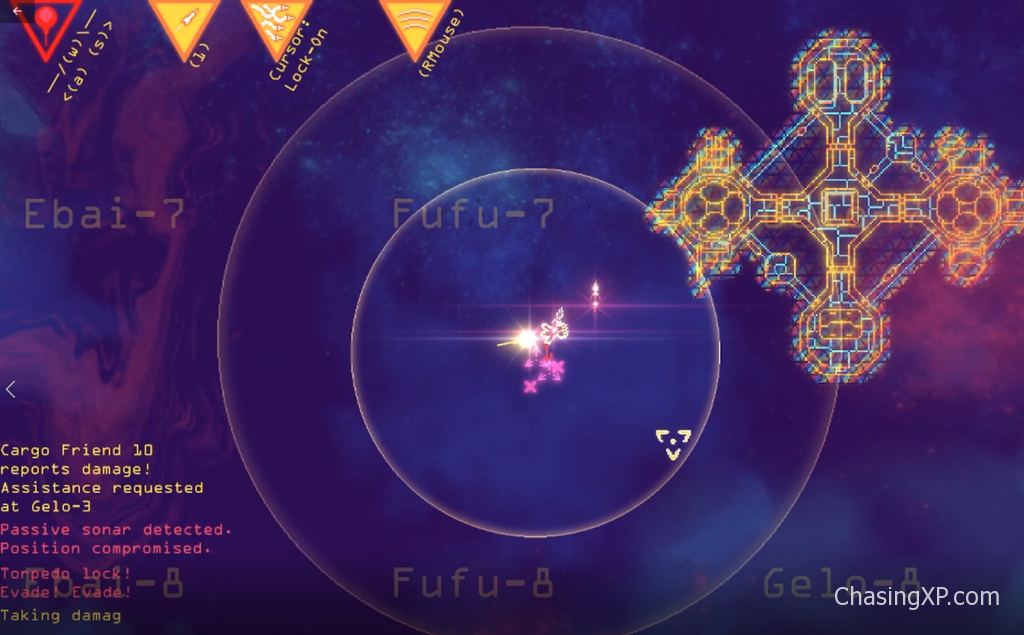 Your prospects of success reduce if you just blast around and fire away; you will need to pop in and out of visibility with short bursts of the engines and curving movements to avoid both detection and enemy fire. This brings a strategic dimension to the game. Games that require a combination of stealth and attack are always more interesting to play than the strait run and gun because they require more thought and a development of your style and tactics to succeed.

Swirl Watch is free over on Itchio, but it’s worth the $3 suggested price. You’ll get a few hours of gameplay out of it. It won’t change your life, but you will walk away wondering what might be with this game.

The original Asteroids never held my attention for very long because there was little variety to the game. The World Record took 53 hours to set, John McAllister, who achieved it, built up the maximum extra lives repeatedly in the game (99) so that he could take breaks and naps.

You are welcome to try breaking that record but you’ll have considerably more fun spending your time on Swirl Watch…only there isn’t a score. 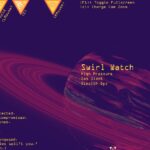 Deep within the pressure-hell of resource rich gas giants, the Floatoid Swirl Watch patrols the field-stabilized zones to keep pirates at bay and refinery installations safe.

A downloadable game for Windows and Linux.

Nintendo has a weird way of showing off its recent works in the Switch era. On the one hand, you have astronomically hyped projects getting mentioned and then not seeing the light of day (Metroid Prime 4, cough cough). Then you have things like Paper Mario: The...

Nintendo has a weird way of showing off its recent works in the Switch era. On the one hand, you have astronomically hyped projects getting mentioned and then not seeing the light of day (Metroid Prime 4, cough cough). Then you have things like Paper Mario: The...