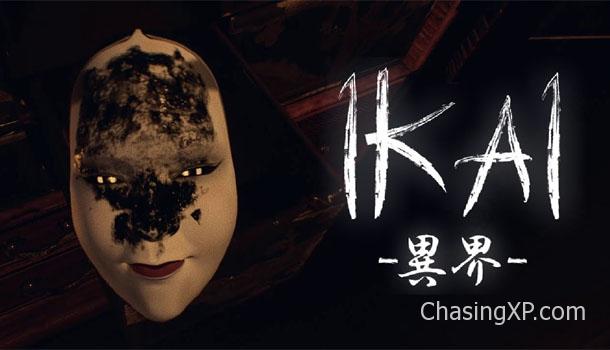 Ikai is a first-person psychological horror game that is bound tightly to Japanese folklore. The player will live the horror from Feudal era’s beliefs as the priestess of a stunningly designed shrine.

Now, some might say that Japanese horror games get a bad rap. Many are immediately compare to the Resident Evil franchise – which is unfair. That’s like comparing every car manufactured after 1964 to a Ford Mustang. It is just not possible. There are certain elements of a game that either make it unique, or outstandingly similar to the rest of the genre.

Endflame Studio have stepped away from the constraints of traditional horror gameplay, and submerged the player in a fantastically produced period Japanese horror story that will not only be fresh for the veteran horror gamer, but astonishing to new players in the genre.

Fear and anxiety prevail after the darkest tales from Japanese folklore come to life in this first-person psychological horror game. Live the horror from the feudal era’s beliefs as the priestess of a temple.

Hey guys! First things first – how did the team get together?

Two of us were working on a company that had to shut down. We thought that instead of looking for another job this could be a good moment to start our own company and try to do the games that we always wanted. We needed an artist to finish setting up a basic team covering all roles, so we asked him if he wanted to join us on this adventure since he was also looking for a job.

The three of us already met at university and at that time we did some projects together. So we knew how each others work.

Your first release, Ikai, is a Japanese first-person psychological horror. What gave you the idea? Why feudal Japan?

We teamed up without any idea in mind. So, the first thing we did was brainstorming which kind of game we wanted to do and we were able to do. A first-person psychological horror was the genre that best fit our skills. But with the genre only we couldn’t do much, we needed a theme, a story.

We all love Japanese culture and are familiar with it, also yokai stories fascinated us. After a little bit of research, we found out that not many games have yokais in it and the ones that have are usually action games, not horror. There are actually some horror games about it but, only a few ones and released quite long ago. The ones nowadays normally approach to J-horror with ghosts of girls, targeting a modern Japan. That is why we wanted to go back to an older sense of fear and include yokais in it.

At that point we knew we had found our spot in the market with Ikai, a first-person psychological horror set in feudal Japan.

With the demo of Ikai released, Endflame is now on the radar of many indie gamers. Have you been happy with the feedback so far?

We have! We have received very positive feedback, people liked the game and wanted more. One of the things we were worried and wanted to test with this prototype was if the idea could be well received and if the public actually wants this kind of game. It makes us very happy to see that people are eager to play the full game and that motivates us to keep working on the project.

The aesthetics & mood of Ikai has been captured expertly. Did you draw on any inspiration for the locations?

We are only three and none of us is a concept artist. We used real pictures as reference to create the aesthetics, yet there is no specific place. As for the mood we just did trial and error until we had something that felt right.

A lot of Ikai is based on dark folklore and superstition, and the premise itself is true psychological horror. Is it difficult to keep upbeat & have a good time when developing something like Ikai?

We are all having a good time developing Ikai because we are doing what we love, making games, and we are doing the way we like. Having that freedom is what makes us happy and motivated on the project. We don’t think the theme really affects us much here.

During brainstorming, it’s quite easy to get swept up in a particular feature of a game. Were there any features you had to cut due to time/team capabilities?

We actually had a realistic planning and didn’t have to cut much for the demo. Sure we will in the final game, milestones are not always easy to fulfill on time if not.

The only thing we had to cut was a specific event, similar to the one of the arms from the walls. After some time of iteration and iteration, we were struggling to get the mood with that event and had to discuss about what to do. Spending more time on that wouldn’t grant us a successful outcome and if it were on the demo, it wouldn’t have the quality we expected. Consequently, we decided to remove it.

What are you most happy about with the game so far?

There are actually two things that make us feel proud and happy about our game.

The first one was to get a creepy mood, an environment that could make the players feel unsafe even when having not seen the monster yet. It is the first game we develop having the full control of the project and were worried of being unable to achieve this aspect. We can tell from the reactions that most of players feel tense, so it’s kind of relieving.

On the other hand, we wanted to approach to the Japanese theme with the respect it deserves. As enthusiasts of the culture we felt we had to express it the best way we could. After receiving positive feedback from the Japanese market itself, we can’t help but feel happy about the reactions.

What has been the most challenging aspect of the game development process so far?

We had experience on programming, design and art already. We can keep improving and there will always be challenges but, the most challenging aspect came from a role that must be present in every game development: marketing. Having no experience on that, we had to cope with it from the very beginning. It is something we are still working on and find it difficult to reach our audience. However, we keep trying as much as we can to get visibility and get people to know Ikai.

Indie games have proven amazingly popular during the Covid-19 pandemic. Some development teams, however, have found it hard to adjust to the “new normal” of working remotely. Has any lockdown restrictions affected the development process (maybe in ways you didn’t anticipate)?

In regards to remote working, we were already used to it, thus it didn’t change much. What we didn’t anticipate was that our friends wouldn’t be able to come and help us out with the testing. We ended up doing it online, asking them to record themselves as if they were streamers so as we could see their reactions. But, we feel sorry that some of them couldn’t try it out because of having very old computers that can’t handle screen recording, run the game and also the webcam video.

What advice would you give to anyone looking to develop a first person psychological horror?

Launch a demo. We are still halfway of development but, know the right way to follow mostly because of the feedback we have received after releasing a level of the game for free. It is a very good way to test out the audience and see what have you done right or wrong and still have time to improve it before the final launch.

A question for each of the team: What was the first game that got you hooked on gaming…?

Guillem: Pokemon was very popular on that time and asked my parents to buy me the game. They bough me Pokemon pinball… Still a great game.

Iván: I hardly remember it, because I have played many games since that time but, I would say it is Sonic the hedgehog

Laura: I started playing video games with my cousin’s Game Boy and I fell in love with Pokemon Fire Red. That was when I got hooked on gaming.