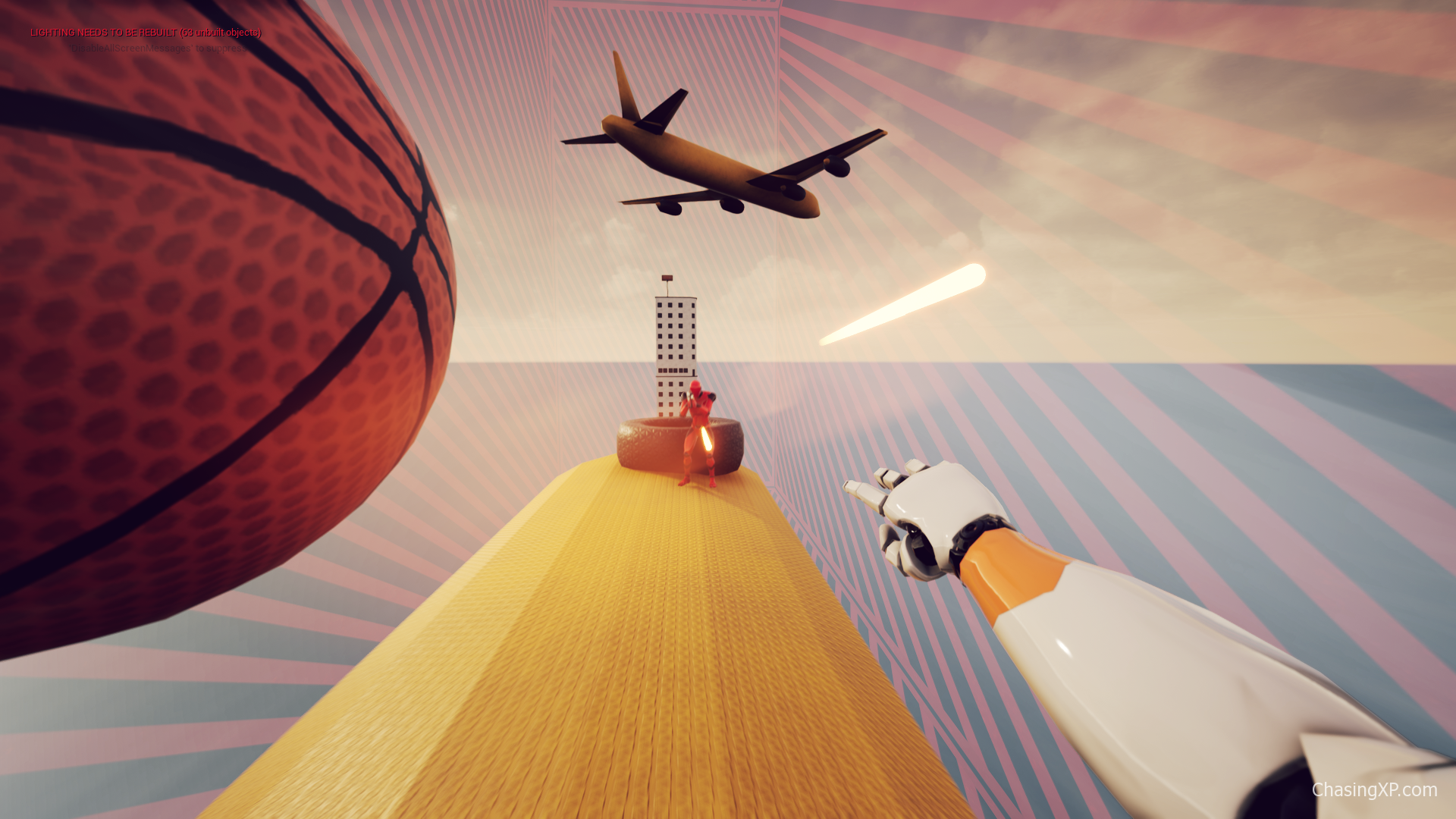 This was the greatest basketball game of all time –  NBA Jam. There you could jump many times your own height in a ‘physics out the window’, big head, WTF are the rules, two-on-two BBall game of speed and excitement. Score three unanswered baskets and the ball caught fire and would fly in from anywhere you threw it. It was raw, arcade power brought to the console and I loved it.

Grapple Hoops is like the love child of a night where Superhot got very drunk and took NBA Jam home for some serious Boom shaka laka….and you’re gonna love it.

The game is essentially an FPS but your gun is a basketball and your alternate weapon is a grappling hook…hence the name. It all looks like the training school for bad assassin robots or something; a sort of Superhot for crash test dummies.

All of the action takes place atop high rise buildings dozens of feet apart that spell certain death should you miss your footing, miss-jump or misfire the grapple. The objective is to score baskets in a strategically difficult hoop at the end of the level. On the way, the basket will be defended by bad guy Crash Test Dummies, who you eliminate by smashing the basketball you are carrying in their empty faces; then watch them fold in slow motion like a cheap tent at the end of a festival. This is the easy bit and you are assisted by a super slow-mo when you draw the BBall to sling a shot, which helps you aim.

There you are at the start of the game, smashing doors down to emerge Keanu Reeves style, on top of a skyscraper and you have to run full pelt off the building with the purpose of jumping some impossible distance. The Mark of the Ninja is a useful personal skill if you have it, because using the grappling hook to fire at rapidly receding flagpole as you fly through the air to swing off ‘a la Spiderman’ is like a sort of colossal half-time crossbar challenge.

This part of the game is pretty unforgiving; you will die a lot getting to grips with the levels and controls. It is so fast and punishing that you can die and restart a level five times in a minute. This sounds tedious and like some sort of excessive rogue-like, but it isn’t. Objects and enemies remain in their place and behave predictably, so rather like a standard FPS, you try and learn where they are, when to act and try different things to get past or defeat the enemies and there are multiple routes to the hoop sometimes.

So despite dying five times in a minute, you will after that minute have made progress and consistently be able to get past what was in your way. So amidst a very challenging game you can feel you make consistent progress. That’s a good trait to have about your game and Grapple Hoops definitely has that ‘once more…this time I can do it’ feel about because of this.

If you get past all the obstacles and sit down all the enemies in your way, then the basket approaches. Often you will be flying through the air at this point…time to draw the ball again and if you sink the shot the rim explodes in a breath of fire and the level is complete. Do this close enough to dunk the ball and the camera will pan out to show you hanging from the hoop post-dunk with it aflame. It’s pretty cool stuff…especially as it’s so goddamn hard to do. There is a genuine sense of achievement to doing this. Most of the time you will be flying in the wrong direction desperately putting up bricks.

The demo consists of five levels and a practice arena. It will take you several hours to get through everything (on easy). The difficulty is set pretty high and I could not nearly complete all the levels of difficulty…but I feel like I could with practice and that’s the key. Each level is timed and there are three settings – easy, medium and hard. So there is a lot of replayability here. Beat your fastest run on a level and get yourself on the leaderboard scores, or try to complete the levels at a higher difficulty.

The levels themselves are not that long and the pace of the game so fast that you can jump in and out of this game pretty quickly, but the challenge means that you will likely always spend more time than you had planned trying to get it right.

Grapple Hoops is like nothing you have played. It’s the sort of game that only an indie developer could make. To mash together the ideas on show here – high rise parkour, basketball Saints Row style and some Tomb Raider swinging, sounds far too confusing to ever get out of the hungover coffee room conversation of ideas in a major publisher; but it works and it’s bold efforts like this that make indie games such an exciting area these day.

So head on over to Steam or Itch.io and download the demo; this game is shooting from downtown and hits nothing but the net. Swishhh…