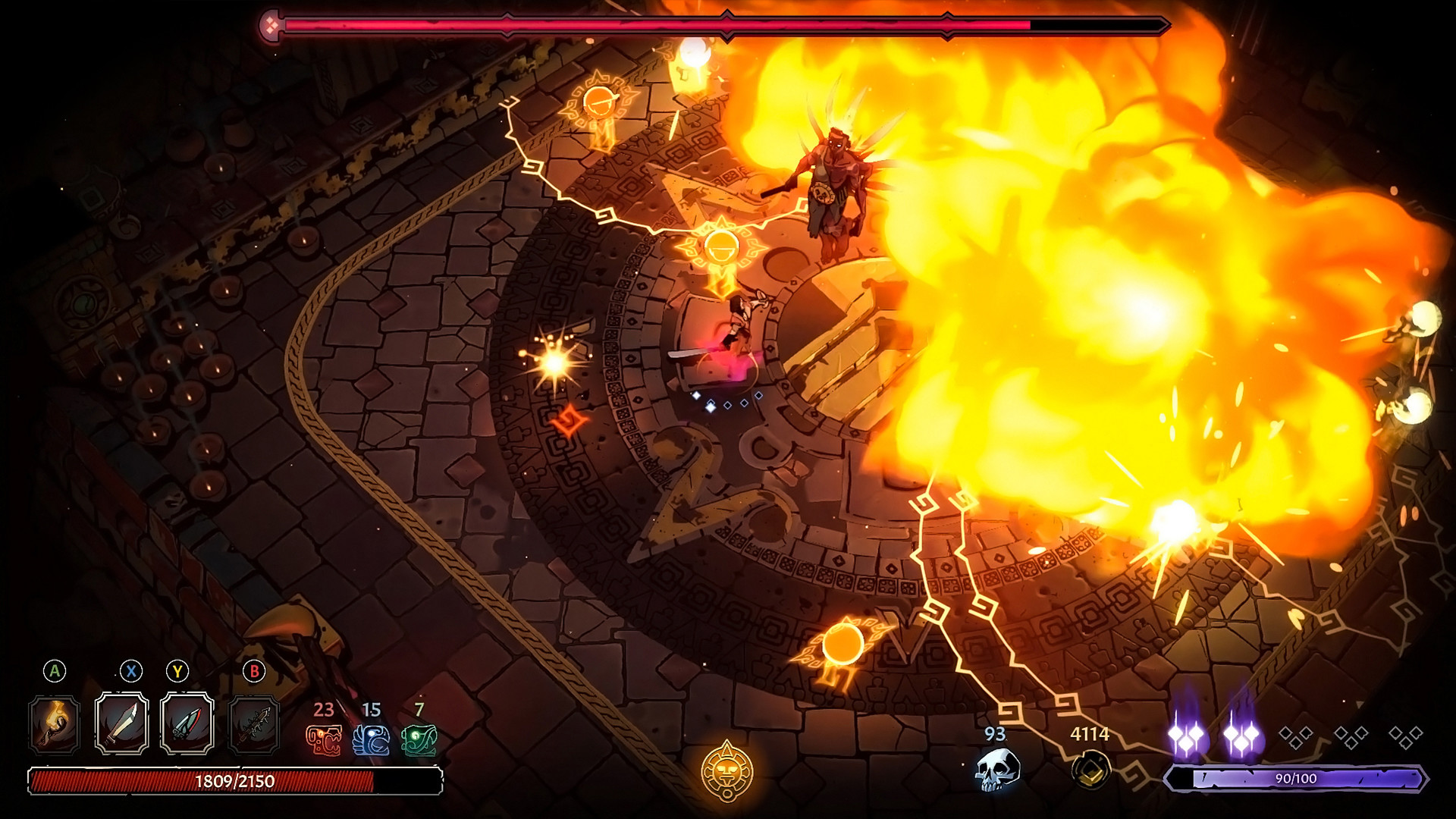 Curse of the Dead Gods Review

If there’s anything of a new hotness in the gaming world, it’s definitely roguelikes. Crawling out from under the towering presence of open world survival titans like Minecraft, RUST, and ARK as well as the battle royale scene with Fortnite and Apex Legends, Roguelikes have been slowly rising to the top over the past few years.

Passtech Games’ first debut into the genre comes out of the gates fast and hard, and became a smashing success out of Early Access. Curse of the Dead Gods features creative and exciting mechanics that make it stand out among the crowd, as well as a striking art style reminiscent of Mike Mignola (of Hellboy fame).

Curse of the Dead Gods starts you off with a simple premise: You’re an adventurer trapped in the ruins of a Chatac temple, heavily inspired by Mayan and Aztec culture. You get a machete and a pistol and you’re off to find the way out.

Cursed To A Miserable Fate

Well, it turns out you’re cursed to roam this labyrinth of never-ending traps and enemies forever. As you go deeper, you become more corrupted and the game steps up the difficulty. Eventually, you may find yourself face to face with a champion of the Dead Gods. If you survive….well, you’re back at the start of the temple.

“Why are you cursed?” you ask, sitting on the edge of your seat.

Well….I dunno? The game unfortunately lacks a strong story behind the amazing gameplay. There are some tidbits of lore tucked away behind unlocks by defeating enemies, but there are no cutscenes or dialogue about who you are and where you are. It all requires a bit of digging, which to me felt like a letdown.

Now, that’s not to say that all roguelikes need stories with them. A good setting is all you need to play Risk of Rain 2, or a creative deckbuilding component to get lost in Slay the Spire. But for a game with such striking visuals and a rich setting with plenty to draw from, the game falls a little flat for me.

The combat is where Curse of the Dead Gods really shines.

Curse Of The Dead Gods vs Hades

Those who craved more difficult combat from Hades or more thoughtful dodges like in Dead Cells will be right at home here. You start with five points of stamina, which is used by dodging, combo finishers, and some two handed weapons. You can regain stamina by waiting, but that makes you a sitting duck. Instead, you need to weave your attacks with your dodges, and stay safe. If you manage to perform a good parry, you’ll even regain some stamina to keep the flow of combat (as well as feel really rewarded when you land a sorely-needed parry).

On top of that, the game offers a ton of weapons and weapon combinations, with 11 total weapon types to choose from, and each type offering 8 unique weapons within them. That’s a LOT of variety, more than you usually get from your average roguelike.

Now that you’ve got the rhythm down, you’re able to fly through some of these levels, and I mean fly. Maybe I’m just too into roguelikes, but I found most levels being really short, and combat not being enough. Maybe there wasn’t enough enemies that spawned, or maybe they were just not that difficult in the first place, but I often breezed through most of the first 5-7 rooms. Maybe I’m just too used to the infinite spawning hell of Risk of Rain 2 or the constant fear as I turn up the heat in Hades, but I breezed through more rooms than I’d like to.

One of the unique mechanics added to the game is the light system. Simply put, you got a torch and you gotta use it! Having your torch out lets you see traps ahead of you, spot enemies and loot, and overall make your life easier. The downside is that your torch takes up your main weapon, so you have to offset higher damage for vision. On top of that, if you get hit by an enemy or a trap while it’s dark, you’ll take more damage.

There are some sconces and whatnot that you can light in some chambers so you can see better, but in my experience they always seem to be extinguished by an enemy as soon as I light it. Instead, I opt to just light one of the baddies on fire (a totally valid strategy) and use them as a natural source of light.

You’ve cleared this floor and you’re ready for the next one. You approach the door, pick your path, and BOOM! You gain some corruption. What’s that? Well, if you fill up the little purple bar in the bottom right, you get a curse. Curses can be wildly different, I’ve had some easy ones that make almost no impact in my run, versus some that made me regret every choice I made so far. It helps keep the game fresh without going overboard. You can also get corruption at any shop you visit, since the game allows you to purchase new relics and weapons with either gold or blood.

Curse Of The Dark Visuals

Now that we’ve talked about most of the core mechanics, let’s talk about the visuals.

Curse of the Dead Gods is a beautiful game, hidden under a very dark world. The art style is grim and beautiful, very reminiscent of Hellboy and The Walking Dead (not the show, the graphic novel).

The floors you run through as you traverse one of the three temples offered (with a fourth coming later this year) are unique and each one stands out from the others. The enemies are unique and interesting, as well as the bosses that await you at the end. Some sections of the game I have felt were too dark, even with my trusty torch in hand.

The few cutscenes the game offers are very well done, with the intro cinematic simple yet powerful. Even the brief scene when you receive a new curse is beautifully animated and iconic. I do wish there were more, to better explain the world or the dead gods we’re fighting against, but maybe that will come in a future update.

At the end of the day, I’m a sucker for roguelikes. Curse of the Dead Gods scratches all of my itches, with unique mechanics presented in an interesting world. However, I do have a couple (minor) issues with the game.

As I stated, the gameplay has a steep learning curve, but plateaus fairly quickly for me. Maybe I didn’t play enough, but by the third temple I was breezing through most floors with little to no issues.

I have no issue picking up a new game, flying through the tutorial and learning the game. But there are just so many mechanics I have to keep in mind while playing the game, that it slowly becomes decision paralysis.

Do I run and dodge to find a place to light this room and fight? Or do I risk it and hope I don’t get hit more than a few times?

Is this weapon really worth that much corruption? Would I be better off with what I have right now?

Do I dodge? Do I parry? Do I need a new weapon for this next floor? Do I want to get a relic? WhichstatdoIincreasenext? WhichcurrencydoIneedtounlockthenextweaponorbuff?

There are a lot of things to ponder about in this game, which I worry will be a turnoff for those who aren’t prepared for it. Especially those coming off the heels of Hades, another similar title with far less decisions to make that actually impact the game.

Would I recommend it? Absolutely, but with a caveat.

For those who are not as invested in roguelikes as I am, I would watch our gameplay footage first to see if it’s something you’re willing to play.

If you like roguelikes, or want a unique and moody atmosphere for a game, by all means pick up Curse of the Dead Gods today.