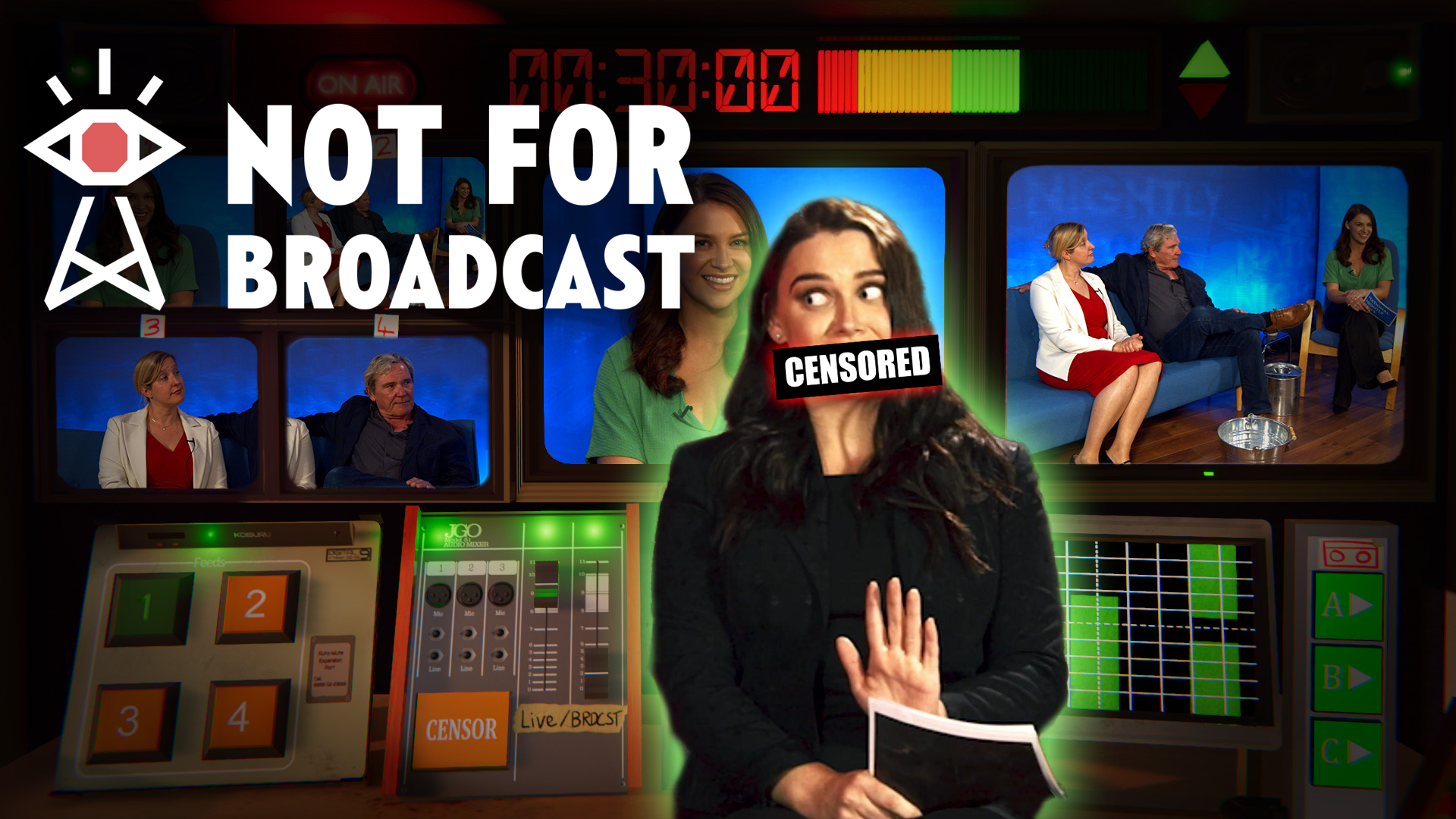 Full Motion Video games are like a 6 year olds school play, terrible but we are never allowed to say. Instead we smile politely and clap and say it was good. The heyday of FMV games was the early 90s when Sony released Johnny Mnemonic and became the first film studio to release a video game…back when the ‘video’ part of that meant just that.

The reality was very different from the hype. Usually offering limited gameplay and using second rate actors who couldn’t create a scene if they had a tantrum in a shopping mall. It was gamers who saw through the hype to realise they actually offered very little and the FMV game died along with punctuality, Fax machines and MC Hammers’ parachute pants at the end of the 90s.

So when ‘Not for Broadcast’ landed on my desk, I was less than excited.

A full motion video game with what looks like second rate actors in grainy rendered footage and cheap backdrops; where you play an trainee broadcast editor for a nightly news programme.

Look, it’s not that hard. Choose the angles, roll the ads, and bleep the swears, but as the tutorial warns you, just keep in mind that how you show these people will change their lives…and maybe yours.

The controls are simple enough and you are introduced to them well in the first level broadcast and the game is outstanding. You begin a year in the job at the start of a new government taking power and one of your first edits is a statement from the winning party leaders.

Things become more sinister and your choices are more subtle as the game advances. For example, having picked up the skill of editing out swear words over a couple of broadcasts, you are then instructed by the station boss to bleep out overly critical statements of the government as well. So when a faux gangster rapper, who spends the entire interview lying and talking garbage, takes the stage for an unrehearsed song that criticises the government, what do you do? Do you edit out the swearing and the criticism or do you allow it and make this prick a hero or perhaps allowing it will get this prick arrested? The choice is yours.

Not for Broadcast consistently puts you in these difficult and subtle positions; asking if you will cooperate to keep your job because you need to to keep your family together? Or if seeing what is happening under this new regime and the impact that has on your family, will you try to undermine it?

The impact of your choices plays out in text based updates of family life between broadcasts and is tied to what is going on in the country.

This heavy theme of coming police state and your facilitation of it is juxtaposed with the actual broadcast material which is pure comedic gold. So much so, that I don’t much care about my family updates I want to get to the shows. There’s so much going on it’s glorious.

Not only are the jokes puerile in that we frequently deal with the leader of a multi-national company called Rymmington Svist and at one point interview an ex-con called Tit-Wank Tony who unleashes everything on a live interview we might have secretly wished for in our head, but the stories and presentation of each item is delightfully observed and presented.

We have to manage a god awful teenage drama presentation about bullying, a bizarre new sport that has an imaginary round and is invaded by streaking nude protesters, a new tv show for kids about farm animals boufing, one of those inexplicable letharios that seem to do and offer nothing and yet are nationally famous lying in bed hosting a quiz about himself, and so many more wonderful characters that offer delicious comment on society. It is glorious choosing what to do with them? Do you deliver the clean edit you are supposed to or do you broadcast the rants that are supposed to be off-screen? Do you present the message these terribly self-righteous people want to deliver or do you show the tired, eye rolls of the individuals forced to share an interview with them.

Do you cut the adverts short to expose your lead anchor slagging off the guests he is returning to interview or not? There are lots of choices here and all of them are recorded in your edit that went out to the nation that you can rewatch at anytime.

Not for Broadcast isn’t without some small problems though.

I had occasional crashes and had to restart levels and failure and loss of viewers means you are sacked and have to restart the level as well. This can be a bit tedious as we’re running a show here and there are often lengthy things to repeat, but these issues were very infrequent and are enormously outweighed by the sheer fun the game consistently delivers.

Not for Broadcast is still in Early Access and some people like to leave Early Access games alone until they have launched, but you really shouldn’t here. It’s entirely worth it even as it is, despite there being more updates in the pipeline.

Not Games just released one of those, a second large update made during the lockdown of the last 18 months, which has not hampered their style or commitment one bit as they simply introduced an hilarious lockdown of their own in the game, developing a storyline about teddies that come alive and hunt people down requiring society to hide in our homes.

This allows all sorts of observed fun of lockdown; people wearing pants only on the bottom half, fake backdrops and people pretending to be outside, people caught eating lunch and not ready for the camera to be on them and forgetting to switch it off.

The death-teddies eventually invade the studio and become another difficulty to deal with as does a passing storm that electrifies some of the buttons making them unusable. The game winds up the chaos continuously with each broadcast and never lets you stop laughing.

I tell you this is the best Full Motion Video game I have ever seen and is one of the best games of any type I’ve played all year. An hilarious ride with stacks of replayability.

Not for Broadcast is available for about $25 and is worth every penny in current form with more updates to come. My Friends…the revolution will be televised, just put me in charge of broadcasting it will you.